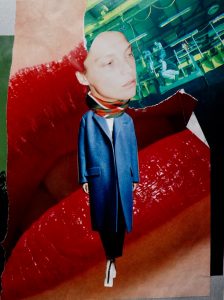 This work aims to illustrate the way gender lies in our head rather than our physical body, it's in our thoughts and feelings. The figure is dressed androgenously and their hair is cut out, further removing the typical physical markers of gender binaries we typically look for to determine someone's gender. With classic red lips behind the figure and a science-like scene behind that, there is a juxtaposition in the background that calls attention to the idea that gender is manufactured, and goes beyond biological binaries (which themselves erase the existence of intersex people.) Another juxtaposition in color between the blue, structured jacket and red lips also points to the colors associated with the binaries of woman and man. The green in the background with the bald figure creates an alien-like feeling, further removing the figure from any one gender binary.

My name is Emily Van Ryn and I'm a first year at the University of British Columbia studying within the faculty of arts. I'm particularly interested in visual art, art history, sociology, and gender/sex/race studies.

I'm a 4th wave feminist and conceptual artist interested in how women experience 'negative' emotions such as anger, shame, and jealousy.

I am interested in exploring gender and sexuality. I draw symbolism from Jungian dream interpretation as well as my own personal experiences and associations with objects, colors, and concepts.

I am interested in coming-of-age stories and what it means to be seen.